Satellite Radio and the Stern Effect 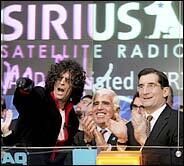 Greg Ponesse — January 9, 2006 — Pop Culture
References: nytimes
Share on Facebook Share on Twitter Share on LinkedIn Share on Pinterest
Last week, Sirius announced that it had granted Mr. Stern and his manager more than 34 million shares of common stock, currently worth about $225 million, because certain subscriber levels had been reached. That is on top of the $500 million that Sirius had already agreed to pay Mr. Stern for his salary and production costs. Mr. Stern now holds more shares than any other single investor, according to David J. Frear, Sirius's executive vice president and chief financial officer.

Whether or not Mr. Stern's show, which begins at 6 a.m., is a success, his decision to jump from free broadcast to subscription radio has bestowed legitimacy to a medium that many had regarded with skepticism. Sirius's number of subscribers has jumped from 660,000 at the time Mr. Stern's deal was announced in October 2004, to 3.3 million today.
2.8
Score
Popularity
Activity
Freshness
Get Better and Faster