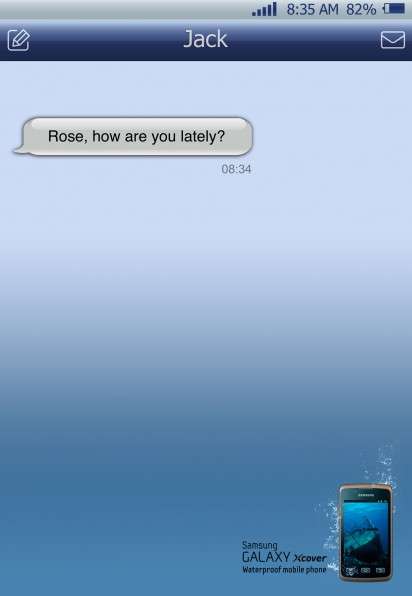 Meghan Young — February 3, 2013 — Tech
References: cheil & ibelieveinadv
Share on Facebook Share on Twitter Share on LinkedIn Share on Pinterest
The Samsung Galaxy Xcover campaign plays a game of make-believe with its audience. To imaginatively illustrate the mobile phone's waterproof capabilities, it shows text messages from fictional characters including Jack Dawson from 'Titanic,' Ariel from 'The Little Mermaid' and the Dragon King of the East Sea. Considering the impossibility of such texts, the campaign hilariously admits that the phones may be waterproof, but they can't work from those depths.

Created by Cheil China, an ad agency based in Beijing, China, the Samsung Galaxy Xcover campaign was art directed by Shengxiong Chen, Qianli Ma and Wenxing Wu. With copy by Wei Xu and Tingting Zhang as well as illustrations by Yuehui Tang, the ad campaign came together nicely as a whole.
5.5
Score
Popularity
Activity
Freshness
Get the 2021 Trend Report FREE