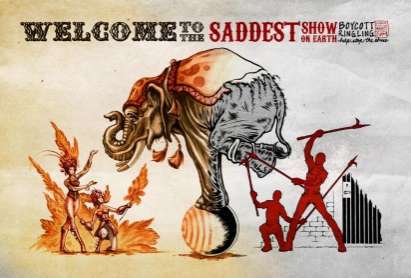 Meghan Young — July 5, 2011 — Marketing
References: ringlingbeatsanimals & ibelieveinadv
Although circus acts are fun, they often involve animal cruelty, which is why PETA's Saddest Show on Earth ad campaign has been created. Targeting one act in particular, the Ringling Bros. and Barnum & Bailey Circus, these print ads show that it isn't all sunshine and daisies when it comes to these amazing tricks.

Instead, the Saddest Show on Earth ad campaign shows that behind the scenes and in between gigs, the animals that give spectators so much joy actually endure a lot of pain and suffering to do so. I suggest you watch 'Water for Elephants' to get a taste of the torture some animals are put through.

Crushed Can Campaigns
The Abramet Ads Advocate No Drinking and Driving