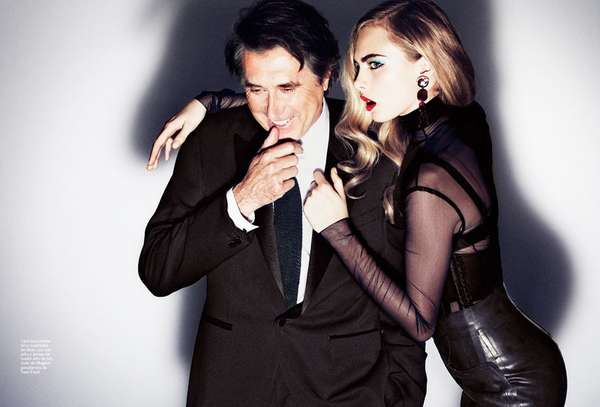 Meghan Young — February 2, 2012 — Fashion
References: smoda.elpais & fashionising
Share on Facebook Share on Twitter Share on LinkedIn Share on Pinterest
There is no secret here; as mischievous as the stars of the S Moda 'Bryan Ferry' editorial may look, the readers are already privy to their stylish ways. Glamorous and sophisticated, the shoot may be short and simple, but the fashion isn't.

Lensed by photographer Simon Emmett, the S Moda Bryan Ferry editorial stars Roxy Music's Bryan Ferry, hence the shoot's title, alongside model Cara Delevingne. With her luscious golden waves, long legs and blood-red lips, Delevigne looks like she is paying tribute to Jerry Hall, who was Ferry's other half back in the '70s. Clad in curve-hugging, skin-revealing numbers, she brings a daring element to the photo shoot, balancing Ferry's dapper and conservative suits.