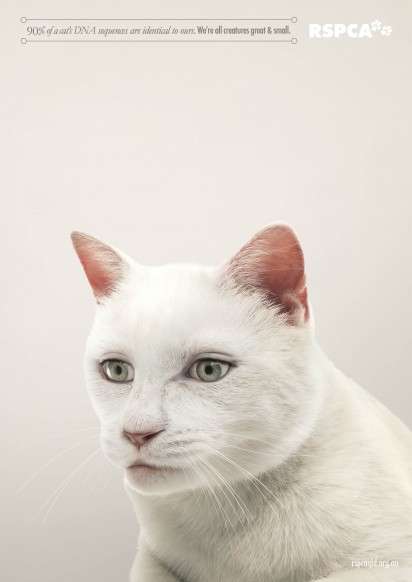 The RSPCA Qld Campaign Shows How Similar People and Animals Are

Meghan Young — June 26, 2013 — Marketing
References: enginegroup.au & ibelieveinadv
Share on Facebook Share on Twitter Share on LinkedIn Share on Pinterest
If something seems slightly odd about the animals featured in the RSPCA Qld campaign, that is because they have been given human eyes. The eeriest, of course, being the cat. Nevertheless, by trading in their own unique eyes for a pair that are a lot more relatable, the RSPCA Qld campaign illustrates just how similar humans are to dogs and cats as well as chickens and pigs. It reads, "We're all creatures great & small."

The RSPCA Qld campaign was conceived and executed by Engine Group, an ad agency based in Australia. It was creative directed by Kory Mcavoy and Tim Hall with photography by Alex Buckingham, graphic designs by Megan Nguyen and retouching by Justin Overell. The results are endearing and empathic, which will hopefully open up hearts and minds.
3.7
Score
Popularity
Activity
Freshness
Get Trend Hunter Dashboard