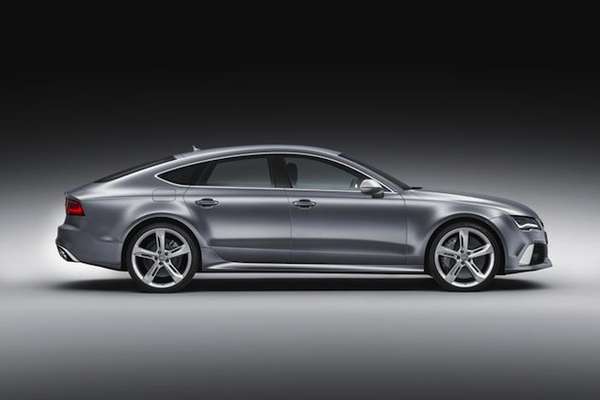 The RS7 Sportback is a Five-Door Coupe

Jonathon Brown — January 15, 2013 — Autos
References: audi & highsnobiety
Share on Facebook Share on Twitter Share on LinkedIn Share on Pinterest
This RS7 Sportback is set to display at this year's North American International Auto Show in Detroit and will hit dealerships this fall. Although it's built for performance, the Sportback has more than enough interior space thanks to five doors.

The RS7 Sportback features a 4.0 TFSI engine producing 560 horsepower. It zooms from 0 to 60 mph (technically 62.14mph) in just 3.9 seconds. However, for drivers looking to hit the open road at the fastest possible speed, the speed governor can actually be deactivated when requested. With a deactivated governor, the RS7 Sportback tops out at a cool 189.52 mph. Be warned, however, that there are few places other than the Autobahn in Germany where such a speed is permitted.

Even with such power and speed capabilities, the car averages 9.8 liters/100km.