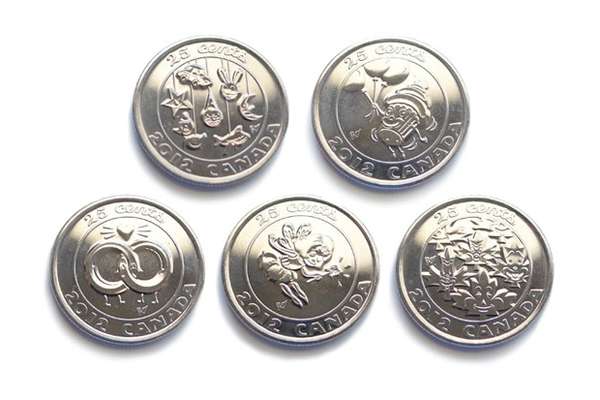 Meghan Young — January 28, 2012 — Art & Design
References: mint & hypebeast
Share on Facebook Share on Twitter Share on LinkedIn Share on Pinterest
Although coin collecting may be considered an ancient hobby to some, the Royal Canadian Mint 2012 Celebratory collection will appeal to younger generations. It has been created in collaboration with Toronto-based artist Gary Taxali, who is known for his whimsical, vintage-inspired artworks and working with such prestigious brands as Rolling Stones, Converse and Kidrobot.

The six coins in the Royal Canadian Mint 2012 Celebratory collection are themed after O Canada, Marriage, Wedding, Baby, Birthday and Tooth Fairy. Using his trademark Chumply font, Gary Taxali was given the rare opportunity to customize the entire quarter. He says, “It’s a dream job and every time I talk about it, the only word I can really describe is honour. It’s a huge, huge honour to be bestowed this kind of privilege and we came up with a really good representation of my work.”
2
Score
Popularity
Activity
Freshness
Get the 2021 Trend Report FREE