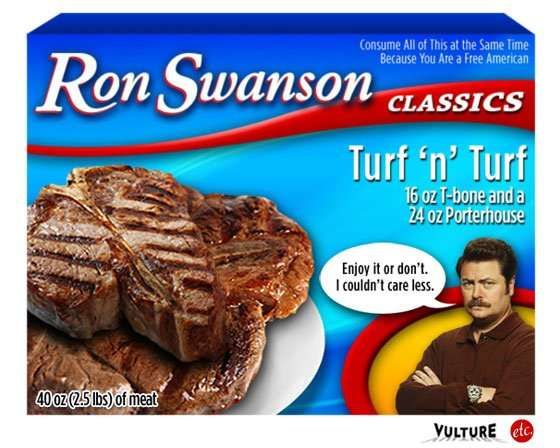 Jason Soy — August 21, 2011 — Lifestyle
References: nymag & facebook
Share on Facebook Share on Twitter Share on LinkedIn Share on Pinterest
The fictional Ron Swanson Classics line of TV dinners should not come as a surprise to anyone who has been on the Internet for the past couple of months. After all, the memorable Parks and Recreation character is already a cult phenomenon, and the slew of products based on him have been overwhelming websites as of late.

The Ron Swanson Classics TV dinner "Turf 'N' Turf" references an episode of Parks and Recreation in which Mr. Swanson eats a 16 oz. T-Bone and a 24 oz. Porterhouse steak to defiantly demonstrate to his subordinate, Leslie Knope, that he can do whatever he likes as a "Free American."

Implications - Consumers enjoy seeing products made with pop culture references because they offer consumers a source of hilarity, a euphoria-inducer. Corporations may consider injecting humor into their products to entice consumers into buying their wares.
0.9
Score
Popularity
Activity
Freshness
Jeremy Gutsche Keynote Speaker