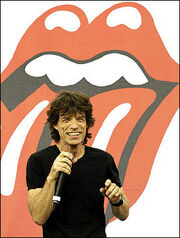 Rebecca Tascona — April 28, 2006 — Pop Culture
References: arts.guardian
It seems like every celebrity these days wants to cross over into another field. From Will Smith to J-Lo, singers are consistently appearing in movies. The latest? Mick Jagger jumping into commedy.

From The Guardian:
It sounds like something Keith Richards might have dreamed up while under the influence of a controlled substance. But this is no hallucination: Mick Jagger, lead singer of the Rolling Stones, really is expected to star in a new sitcom starting on US television in the autumn.

Sitcoms tend to work best when the premise is a familiar one to which all viewers can relate - Friends, after all, was about a group of friends who just hung out together. It is not clear where this leaves ABC's latest planned offering, a 24-part series about a group of hard-up New Yorkers who decide to rob Mick Jagger. (The Guardian)