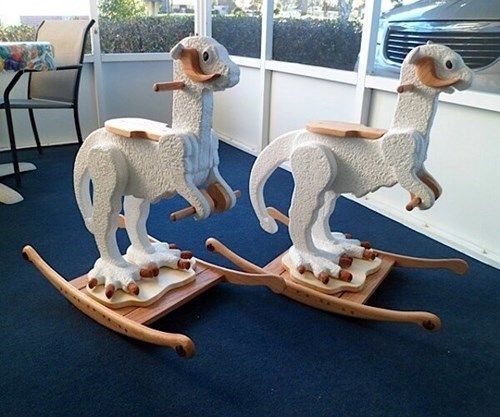 The Rocking Tauntaun are Inspired by a Creature from 'Star Wars'

Meghan Young — January 30, 2014 — Art & Design
References: neatorama
Share on Facebook Share on Twitter Share on LinkedIn Share on Pinterest
Since a traditional rocking horse is made for children, it is only natural that more imaginative ones could be made, even if they involve fictional creatures like the Rocking Tauntaun does. Although inspired by the 'Stars War' franchise, it still fulfills all of the requirements set up by the rocking horse. It rocks, it provides a seat for the user and it resembles an animal.

Made out of what appears to be styrofoam, the Rocking Tauntaun boasts classic wooden parts as accents. Made for the obsessed parent who wants to surround his or her child with anything and everything to do with the sci-fi series, the Rocking Tauntaun is just as creative as other modern takes including aliens and slugs.
6.3
Score
Popularity
Activity
Freshness
Get Better and Faster