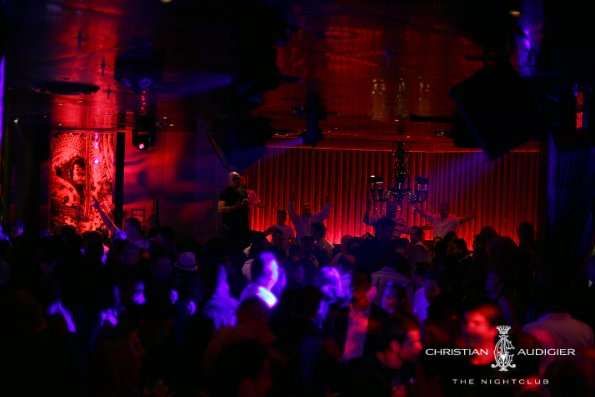 Christian Audiger is the designer behind Von Dutch and Ed Hardy's vintage tattoo-inspired fashion line. He opened the CA Nightclub on July 4, 2008.

"Audigier-inspired designs can be found throughout the club from the staff uniforms to the bar backdrop featuring Audigier-designed champagne bottles," the CA Nightclub MySpace site says.

"Clubgoers be dazzled by skulls, roses and gleaming crystals accenting the inside of the club while the chic outside patio element provides plush chaise lounge chairs offering patrons a front row view of the hottest corner on the Las Vegas Strip."

Audigier has a huge celebrity following, ranging from Snoop Dog to Barbara Walters, who recently wore a white jacket by Audiger on the view, to Paris Hilton... wait, hasn't just about every young celebrity been seen hiding under a Von Dutch trucker hat? Fergie also mentions Christian Audigier in Labels or Love.

By the way, Audiger's next project is a line he'll be working on with Michael Jackson!