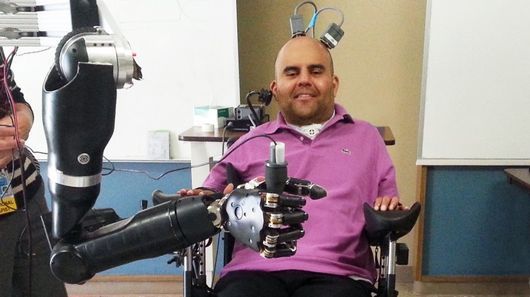 This Robotic Arm Reacts Faster Than Other Thought-Controlled Arms

Most mind-controlled prosthetics are activated by implants in the brain's motor cortex. However, this particular robotic arm is hooked up to the Posterior Parietal Cortex which, rather than controlling movement, is actually responsible for the intent to move. This means that that there's no delay between the user's 'thought' and the actual action. Moreover, the arm's movement is also smooth.

The arm was implanted into patient Erik Sorto, who is able to shake hands, drink beverages, play rock-paper-scissors and even control a cursor on a computer screen. Indeed this technology could help bring back some independence to quadriplegics in their daily lives.
0.8
Score
Popularity
Activity
Freshness
Get Better and Faster