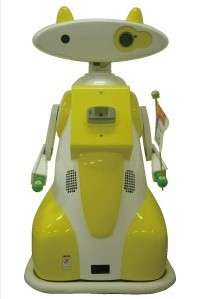 The 1.4-meter tall robot with a colorful yellow / white outfit was developed by Tmsuk and features an integrated projector and camera.

The projector, which is installed in one of its eyes, beams advertising messages and can be used to show pictures that were captured with a camera installed in the other eye.

It is able to identify children by name using a special tag that each kid wears while playing and chats with them according to their age.


Here's another Japanese monitoring device they plan to install in shopping malls...