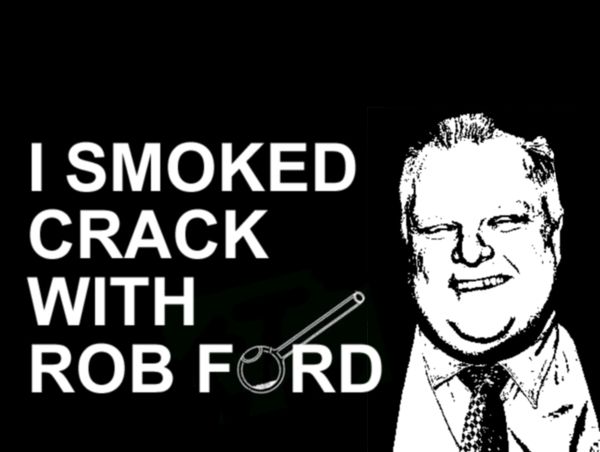 Ashley Noelle Lesiak — November 5, 2013 — Naughty
References: ca.news.yahoo & imgur
Share on Facebook Share on Twitter Share on LinkedIn Share on Pinterest
Toronto mayor Rob Ford’s recent shenanigans have brought some less-than-flattering attention to the city of Toronto. While some may feel embarrassed and worried about the reputation of the city, I personally reject those feelings. We should embrace that corrupt image; it’s what makes a “World Class City™,” after all. Besides, what’s New York without the crime? Chicago without Al Capone? Amsterdam anyone?

This, at least, seems to be the attitude some people on the Internet have, as some have tried to capitalize on the scandal by making commemorative t-shirts. You can wear them even if you are a fan of Ford, seeing as some of his supporters have stated they will stand by him whether he does drugs or not. Unfortunately, the “I Smoked Crack with Rob Ford” isn’t on sale, but I’m sure as soon as the creator realizes that statement isn’t as much liable as it is possible, they will change their mind. Hopefully the new attention on Toronto will lead to more interest, which hopefully will lead to more tourism.