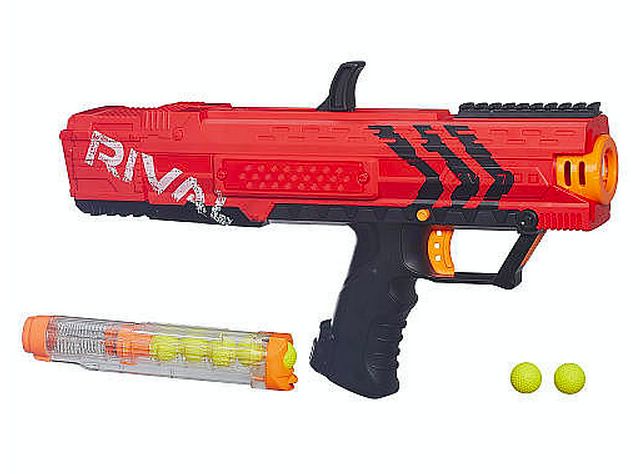 Cadhla Gray — August 19, 2015 — Life-Stages
References: toyland.gizmodo & popularmechanics
Share on Facebook Share on Twitter Share on LinkedIn Share on Pinterest
Rival NERF guns make the move from floating darts to zooming balls, turning the game played with the toy weapons into a much faster, more exciting tactical game. Named after Greek mythological gods, the Apollo XV-700 and Zeus MXV-1200 guns turn up the intensity of the children's classic. With the foam balls blasted out of Zeus reaching speeds of 70 MPH, accuracy is also increased -- giving players the ability to develop their skills and involve more competition.

The dimpled balls are designed after golf balls and the loading mechanism is much faster than past guns as well. To load the balls, there is a hollow cylinder inside the gun, which you can smack down repeatedly over each ball, sliding them up the shaft. With the added accessory of safety masks, these Rival NERF guns are geared towards older children and adults who love a little competition.
4.7
Score
Popularity
Activity
Freshness
View Innovation Webinars