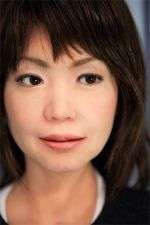 A recent article by the Associated Press revealed that this bot can react naturally to many emotions, "It can block an attempted slap, for example. But it's the little, â€œunconsciousâ€ movements that give the robot its eerie verisimilitude: the slight flutter of the eyelids, the subtle rising and falling of the chest, the constant, nearly imperceptible shifting so familiar to humans."