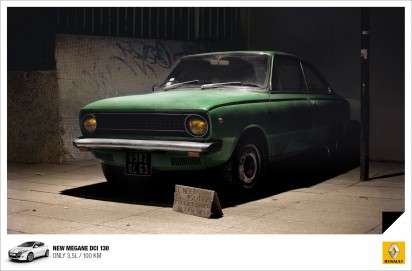 Meghan Young — October 26, 2012 — Autos
References: publicisgroupe & ibelieveinadv
Share on Facebook Share on Twitter Share on LinkedIn Share on Pinterest
Homelessness may be a big problem for the human species, but the Renault Megane DCI 130 ad campaign shows that it is just as troubling in the car community as well. In this case, however, the problem begins and ends with the common adage, "Out with the old and in with the new." Basically, the new Renault Megane DCI 130 has pushed out the old cars, some of which can now be found begging for fuel.

The Renault Megane DCI 130 ad campaign was conceived and executed by Publicis Conseil, an ad agency based in Paris, France. Although it depicts a couple of sad situations, it also shows how fresh and cost-effected the Renault Megane is. The ad campaign was art directed by Martin Darfeuille and shot by photographer Will Sanders.
3.6
Score
Popularity
Activity
Freshness
View Innovation Webinars