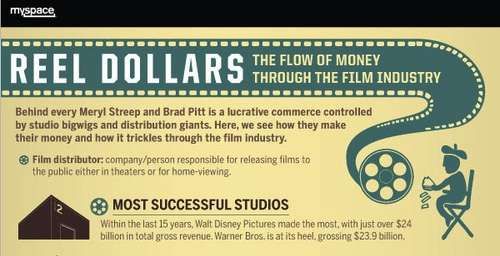 The Reel Dollars Infographic Breaks Down the Film Industry

Corinne Guirgis — August 15, 2011 — Pop Culture
References: awesomeinfographics & holykaw.alltop
Share on Facebook Share on Twitter Share on LinkedIn Share on Pinterest
It's no secret the movie industry is worth more than millions in gold, but the Reel Dollars Infographic breaks down the details for all you business-minded film buffs. Taking a close look at the flow of money through the various elements of the industry, the graph addresses everything from the most successful studios to theater distribution and how actors get paid.

Not surprisingly, holding the number one spot for most lucrative studio is Walt Disney followed by Warner Bros, with Sony and Paramount trailing not far behind. What's more interesting is the salary breakdown of the top paid actors of 2010, which places Johnny Depp at the top with a whopping $75 million and Sandra Bullock in a not-so-close second at $25 million.

Implications - The major motion picture industry is one of the most lucrative in the world. At various levels from studios to producers, directors actors and many more, those who find success from incredible box office numbers will continue to see these numbers as buzz continues around the projects with which they're involved. Infographics like these, which show the transparency of the financial status of the industry, only work to generate more buzz and status for Hollywood cinema.
1.2
Score
Popularity
Activity
Freshness
View Innovation Webinars

29 Romance-Inspired Infographics
These Charts Offer Facts, Stats and Romantic Advice for All Lover