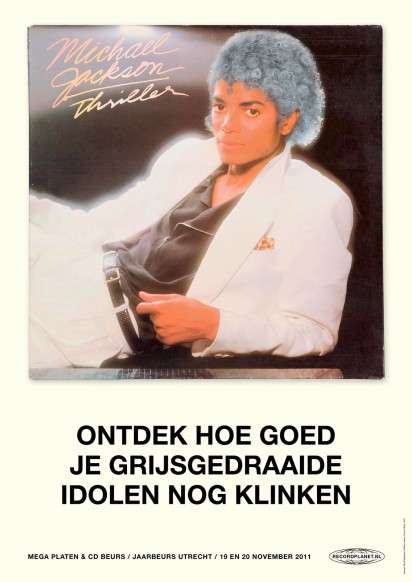 Meghan Young — November 19, 2011 — Marketing
References: recordplanet.nl & ibelieveinadv
Share on Facebook Share on Twitter Share on LinkedIn Share on Pinterest
Record Planet has taken an interesting route to advertise their Mega Record & CD Fair. Focusing on music legends such as Michael Jackson, David Bowie and John Denver, this series of print ads has tweaked these rockstars, giving each of them gray hair.

Conceived and executed by Doorn & Roos, an ad agency based in The Netherlands, the Record Planet ad campaign essentially shows their continued longevity in the industry. Well into their old age, Elvis, The Beatles and Prince are still seen rocking out, even if it is just in Record Planet's renditions.

For those who love the genre of rock and roll, and want to imagine what certain deceased stars would look like today, this campaign is the perfect solution.
5
Score
Popularity
Activity
Freshness
Get Better and Faster