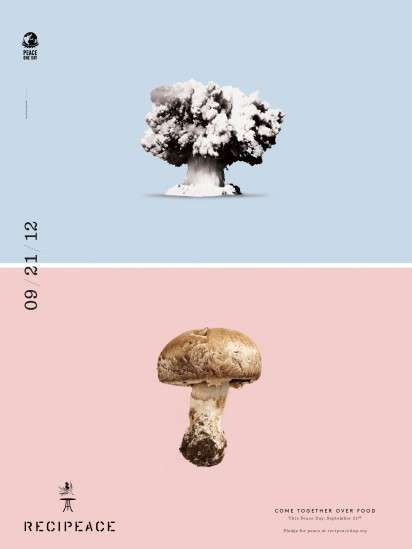 Meghan Young — September 20, 2012 — Lifestyle
References: leoburnett & ibelieveinadv
Share on Facebook Share on Twitter Share on LinkedIn Share on Pinterest
Food is often touted with the power of bringing people together, so it is only natural that the Recipeace campaign would revolve around it. In celebration of International Peace Day on September 21, 2012, this social movement aims to join conflicting people through food. As depicted by the colorful and minimalist Recipeace campaign posters, these people can trade bombs for mushrooms, machetes for bread and bullets for fish.

The Recipeace campaign was conceived and executed by the Leo Burnett ad agency based in Chicago, United States. This advertising firm has approached chefs, restaurants, foodies and more to join the Recipeace movement. By doing so, they will pledge for peace through food in various ways, be it cooking, eating, tweeting or more.
2.9
Score
Popularity
Activity
Freshness
Get the 2021 Trend Report FREE