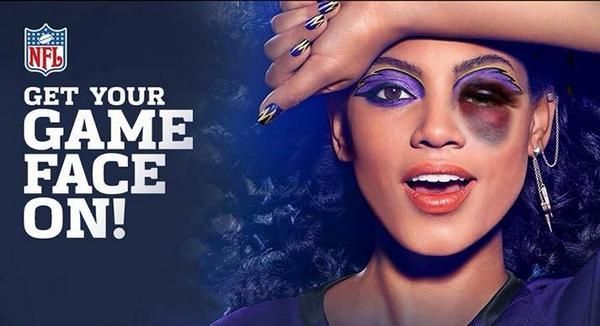 This Twitter Campaign Was Inspired by the Ray Rice Scandal

Rahul Kalvapalle — September 15, 2014 — Lifestyle
References: twitter & hollywoodreporter
In the wake of widespread controversy and anger over the NFL's handling of player Ray Rice's domestic abuse situation, observers are using a Photoshopped image of an NFL ad to criticize the NFL and spread awareness about the problem of violence against women in the sport of football.

The image shows an NFL CoverGirl ad, with the image Photoshopped to give the model a black eye. The official NFL logo -- as well as the slogan 'Get Your Game Face On' -- remains. The manipulated image of the model with a black eye is disturbing to look at but does a great job at highlighting the problem of violence against women as exemplified by the Ray Rice situation. It also effectively uses darkly sharp wit to turn the NFL's own slogan against it as a form of criticism.

The image is being widely shared by Twitter users using the hashtags #GoodellMustGo, referring to NFL commissioner Roger Goodell, and #GetYourGameFaceOn.