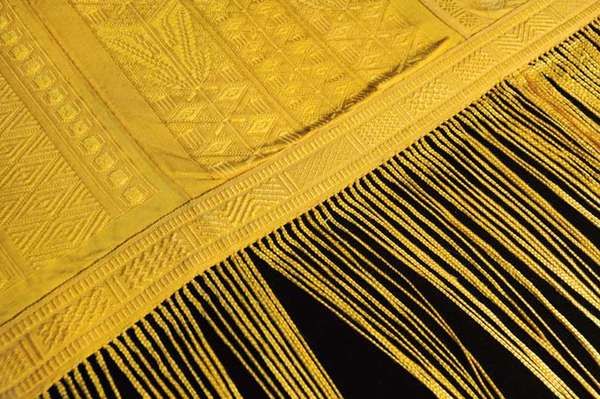 One Million Spiders Made the Golden Silk for RareTextile

Katie Cordrey — September 26, 2009 — Eco
References: nytimes & wired
Share on Facebook Share on Twitter Share on LinkedIn Share on Pinterest
More than a million wild spiders were needed to produce the silk for a golden colored cloth that is on display at the American Museum of Natural History in New York City. The golden orb spider of Madagascar can grow to be as large as a human hand. In addition to eating birds, the spiders spin saffron-colored silk thread with a tensile strength five to six times stronger than steel by weight.

Simon Peers, a British art historian and textile expert and Nicholas Godley, an American fashion designer both living in Madagascar teamed up five years ago to produce golden silk from native golden orb spiders. The technique had not been tried for more than 100 years. The end result is a stunning one-of-a-kind 11-foot-long cloth.

The spiders used to create the fabric were tracked for yield and casualty rate. Some died, but the surviving spiders were released daily. Peers and Godley plan to help protect the spiders and to use them to create future projects.

“We have become sort of the defenders of these spiders, something we never thought we’d be,” said Mr. Godley, who calls himself a committed arachnophobe, but added, “They really are very regal-looking creatures.”
5.1
Score
Popularity
Activity
Freshness
View Innovation Webinars