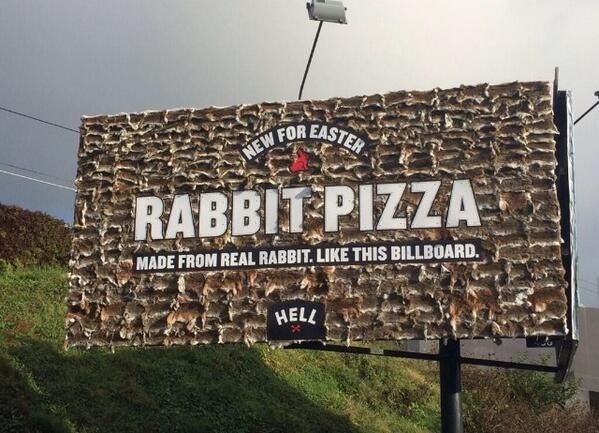 Laura McQuarrie — April 12, 2014 — Marketing
References: mirror & prexamples
HELL Pizza is known for its controversial ad campaigns and the new billboard it put up to announce its special Easter-edition rabbit pizza is definitely a shocker.

Adorable bunnies have become synonymous with Easter, but this ad by the Barnes Catmur & Friends agency certainly doesn't have happy bunnies twitching their noses and frolicking in fields with baby chicks. Instead, the shocking billboard's backdrop is entirely made from dead bunnies and the text on the ad loudly and proudly states that its pizza is "made from real rabbit, just like this billboard."

Although HELL Pizza has resorted to some shocking tactics in the past, this one is pretty appalling and there's no doubt that some animal rights groups will be up in arms about this. However, just as HELL Pizza seems to like, people will talk either way.
5.7
Score
Popularity
Activity
Freshness