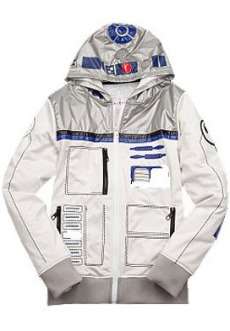 Erin Kirkpatrick — January 12, 2013 — Pop Culture
References: amazon & outblush
Share on Facebook Share on Twitter Share on LinkedIn Share on Pinterest
With Disney now owning the Star Wars franchise, the R2-D2 Jacket by Ecko may be accepted by a new and younger niche market. Modeled after the incoherent metallic droid referred to as R2-D2, this jacket pays tribute to a character that at one time only existed in the imagination of George Lucas.

Having made appearances in all of the Star Wars installments, the beeping, whirling and caring robotic has retained a cult of avid fans. Now these fans can dress in the officially licensed fashion of the pint-sized robot.

Individuals can keep themselves warm and toasty in a jacket that is just as intelligent as C-3PO faithful companion. The R2-D2 Jacket by Ecko has been designed to optimize its authentic representation of the space-dwelling droid. With a detailed hood designed to look like R2-D2's dome, complete with all the buttons and gizmos, this winter wear will make Star Wars junkies ecstatic.
2.1
Score
Popularity
Activity
Freshness
Get Trend Hunter Dashboard

Star Wars Totes
The R2-D2 Handbag is Nerdy But Stylish