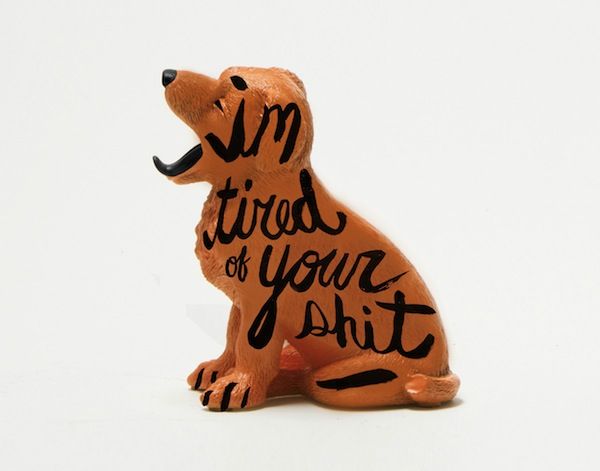 Quotes on Shit by Jessica Walsh and Timothy Goodman is Clever

Meghan Young — September 27, 2014 — Art & Design
References: quotesonshit.tumblr & designtaxi
Quotes on Shit is a clever art series that involves giving unwanted objects a voice. Old porcelain figurines, ashtrays and even soccer balls are painted over in a bright solid color and then hand-lettered with a quote that really captures their essence in a playful and creative way. For instance, a yawning ceramic dog reads, 'I'm tired of your shit,' while a purple cassette tape reads, 'I used to matter.'

As poignant as they are playful, the Quotes on Shit art series was created by New York City designers Jessica Walsh and Timothy Goodman. They tell their audience, "We feel bad for this abandoned and rejected shit so we're rescuing these objects and breathing new life into them by giving them a voice with words." An admirable and fun project.
1.7
Score
Popularity
Activity
Freshness