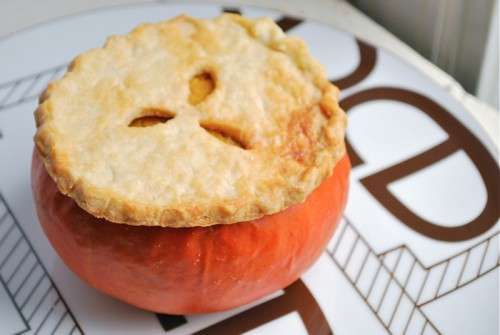 Meghan Young — November 27, 2011 — Special
References: blogs.babble & neatorama
Share on Facebook Share on Twitter Share on LinkedIn Share on Pinterest
This weekend is sure to be filled with some delicious desserts for American Thanksgiving, but there will probably be nothing as creative as the 'Pumpkin Pie in the Pumpkin.' This traditional Thanksgiving pie tops all other attempts by actually being baked right into a pumpkin, as its name clearly suggests.

Conceived and baked by blogger Brooklyn Supper, the Pumpkin Pie in the Pumpkin is not only a great dessert, but it also doubles as a uniquely festive centerpiece for the dining room table. Of course, people might not be able to concentrate and fully appreciate the turkey, gravy, stuffing and more if this delicious dessert is constantly in front of them as a temptation.

It it important to note, however, that the Pumpkin Pie in the Pumpkin is not actually baked into a pumpkin, but a squash instead.
0.3
Score
Popularity
Activity
Freshness
View Innovation Webinars