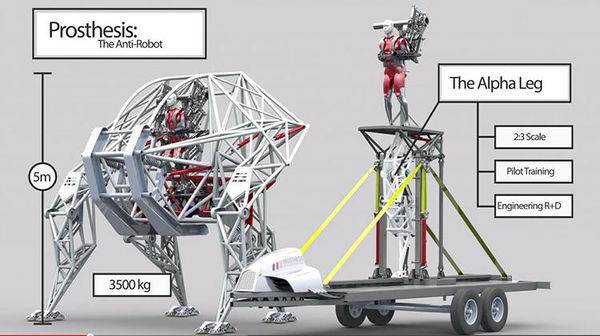 The Prosthesis by Jonathan Tippett is Meant to Rival Formula One

Meghan Young — January 3, 2014 — Unique
References: anti-robot & fastcoexist
Share on Facebook Share on Twitter Share on LinkedIn Share on Pinterest
There have been some impressive exoskeletons conceived for the near future, but the Prosthesis by Jonathan Tippett, an artist and engineer based in Vancouver, Canada, is something else entirely. As though straight out of a sci-fi flick such as 'Avatar,' 'Aliens' or even 'The Matrix Revolutions,' this exoskeleton is gigantic, essentially forming an animal-like layer around the user.

Described as an anti-robot, the Prosthesis by Jonathan Tippett is reaches two-story-high and weighs 3.75 ton. Tippett states, " "It can't walk or balance or do anything by itself. It's completely human-controlled. The whole point of building this machine is to create a new experience for the user, or the athlete, inside. The machine is built for humans, by humans." Built as a alternative racing machine, one that hopes to rival Formula One, it is meant to be ran in.
2.9
Score
Popularity
Activity
Freshness
Access Advisory Services