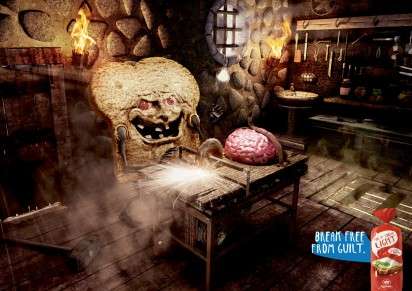 Meghan Young — December 7, 2011 — Marketing
References: ibelieveinadv
Share on Facebook Share on Twitter Share on LinkedIn Share on Pinterest
The 'Princesa Break Free From Guilt' ad campaign comes just in time for the holiday season. As people become increasingly bombarded by all the delicious meals and desserts made during this time of the year, they will be looking for ways to cut back on calories and carbs. This loaf of bread offers an easy, albeit evil-looking solution.

Conceived and executed by Staff, an ad agency based in Brazil, the Princesa Break Free From Guilt ad campaign shows a slice of bread channeling its inner Frankenstein. Instead of creating a monster, however, it is simply trying to change people's brains, making them feel less guilty since it provides a healthier alternative to other loaves of bread.
3.6
Score
Popularity
Activity
Freshness
Jeremy Gutsche Keynote Speaker