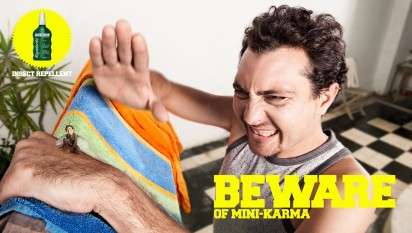 Meghan Young — May 10, 2012 — Marketing
References: draftfcb & ibelieveinadv
The Premier Insect Repellent campaign takes on a Buddhist mentality. It warns people to "beware of mini-karma," as its tag line states. Bringing harm to even the littlest creature can result in undesirable consequences for the culprit. Instead of dangerously swatting away pesky bugs, people can simply avoid them all together with this handy insect repellent.

Conceived and executed by Mayo and Draft FCB, two ad agencies based in Peru, the Premier Insect Repellent campaign revolves around people who are about to squash insects with their own likeness. It is a simple and creative interpretation of the ad campaign's tag line.