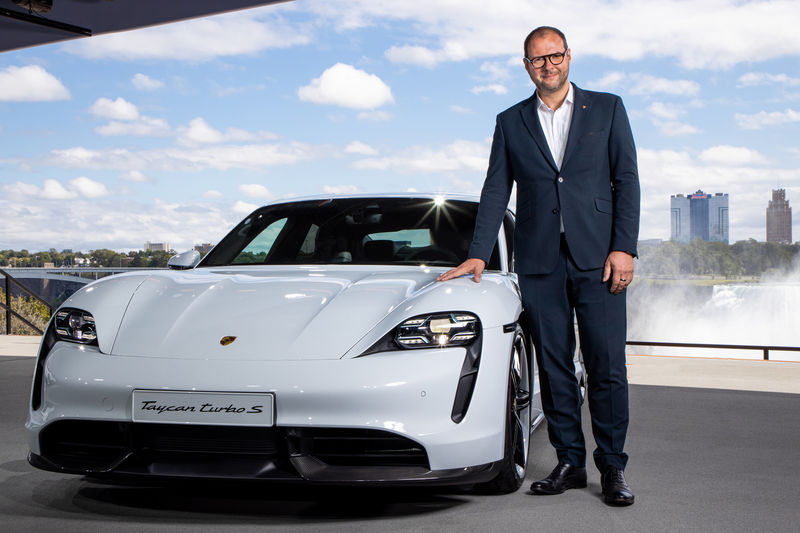 Riley von Niessen — March 2, 2020 — Business
References: porsche
Share on Facebook Share on Twitter Share on LinkedIn Share on Pinterest
The 2020 Porsche Taycan is the German car manufacturer’s first all-electric vehicle, and offers the styling, handling, and luxurious experience that the brand’s sports cars are so widely known for. To learn more about the brand’s entrance into the electric space, the challenges faced by the Porsche team in launching the Taycan, and what sets it apart from other electric vehicles on the market, we sat down with Marc Ouayoun, President and CEO of Porsche Cars Canada at the Canadian International AutoShow.

What prompted Porsche to design its first all-electric vehicle?

Porsche designed its very first version of an electric vehicle 120 years ago. As a company that focuses on engineering, Ferdinand Porsche, the father of Porsche and the one who created the brand, wanted to explore new mobility possibilities with electrification. The first electric vehicle is now in a museum, but it really shows the pioneering spirit of the brand.

About 15 years ago, we were already creating some wonderful and innovative sports cars, but when thinking about the future, we knew there would need to be a change that offered a more sustainable solution. We needed to honor our DNA and our past, while also thinking about the sports car of tomorrow. So, we did an analysis and we decided that the electrification of Porsche vehicles would feed the DNA because an electric engine is very fast, it can accelerate quickly, the center of gravity with the batteries is very low. With the torque of the electric engine, you have instant acceleration as well, which is another aspect that feeds into the brand's DNA.

After this, we did the first test: it was the 918 Spyder and it was the first supercar with a plug-in hybrid drivetrain. That concept was created 10 years ago, and the car has remained a huge success since its launch in 2014—it's really been perceived as a revolution. It was the first time that a sports car maker created a plug-in hybrid supercar. Then, we continued with the electrification of the Panamera and the Cayenne as plug-in hybrids. This has also been a big part of our strategy, to combine electrification with combustion engines for a better range.

After these models, we knew we had the right technology and we were able to move towards a 100% electric vehicle, which is the Taycan. This has been a huge game changer for us: to create a pure electric car that is also a sports car. There are other electric vehicles on the market, but we've really succeeded in creating one that has the functionality of a sports car.

As you've explained, the Taycan successfully balances performance with electrical efficiency. What challenges did the Porsche team face while striving for this?

I think the main challenge has been to create a seamless customer experience. When it comes to charging infrastructure, many customers have anxieties over accessibility and range. So, it's very important to explain the car and exactly how it functions, but also to provide great service to our customers.

With the twin-style electrification, the charging station is at home. So, we developed a portal for that, which is extremely easy to use and connects the user with the dealer. You can use a portal, do a test online to answer a few questions, and then get a visit from a certified electrician. The electrician will check your installation and make a recommendation for the charge, which gives our users more peace of mind. Education is really the most important part. The car itself is great, but just offering an electric car doesn't mean that we'll be successful. You really need to think about the whole experience. For example, the Porsche Connect app allows you to preheat the car in the morning before you leave. Instead of using the battery to heat the car when you drive, it's much better to program these features in advance, so that if you leave at 8:00 in the morning, your car is ready to go at that time. So, using the app is important as it provides more connectivity, and then of course, having a seamless charging experience is what attracts many consumers to the Taycan.

How does the Taycan differ from other electric vehicles, such as the Tesla Model S?

It differs in that our benchmark wasn't an electric car, it was a Porsche 911. That was our goal when we created the Taycan—we created an electric car that drives like a Porsche, feels like a Porsche, and even offers the same low driving position as the 911. You're really sitting on the road and the interior has that same sporty look. We wanted to use our DNA first and create an electric car based off that, instead of looking at the market and trying to take inspiration from others or replicate something else. I think that to remain faithful to our DNA, that was the right approach.

Apart from being all-electric, what sets the Taycan apart from other Porsche models?

I think it's the driving dynamics. Our cars have a very finely tuned chassis, drivetrain, and so on, but the Taycan has incredible performance, it truly offers the performance of a supercar.

The Taycan is incredibly fast and it can repeat a high-level performance over and over again. That's one aspect that makes it very different from other electric cars, as other vehicles tend to see a fade in performance over time. With the Taycan, you can repeat a 0 to 100 acceleration in less than 3 seconds, 10 times in a row, or 0 to 200 km/h in less than 9 seconds. The Taycan is really special in that regard.

Additionally, this is the only electric car with a two-speed gearbox, which must get from 0 to 100 quickly, and then the second gearbox is used at a higher pace. I would say it's a Porsche from the DNA perspective but what makes the real difference from the Taycan and the other cars is certainly the overall performance of the car. It drives extremely well.

Which consumers does the Taycan appeal to specifically—why do you think this is?

According to the first orders we have, we've attracted many new customers with the Taycan. Approximately 60% of the customers that are interested in the Taycan and that placed orders are from other brands—they don't own a Porsche yet. Another 40% are Porsche owners, which means that some Porsche owners want to have a Taycan as their main vehicle.

For example, they'll keep a 911 in the garage and buy a Taycan to commute with every day. For other customers, it's an entry to the Porsche brand. It's possible that without the Taycan, these customers might not have considered Porsche at all for their lifestyle, as they might have considered it to be too exotic, or thought of it as a sports car-only brand. With the Taycan, I think we can really target a much broader audience interested not only in luxury, but in sustainability.
6.3
Score
Popularity
Activity
Freshness
Get the 2021 Trend Report FREE