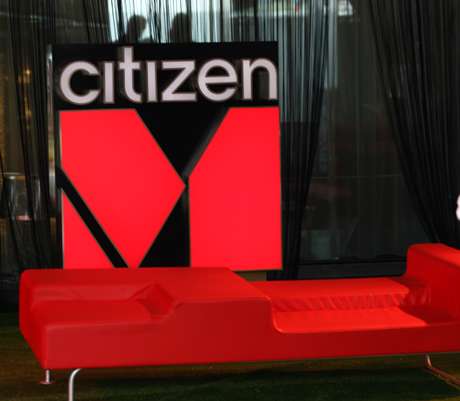 Happy Hotelier — June 27, 2008 — Special
References: citizenm & happyhotelier
Share on Facebook Share on Twitter Share on LinkedIn Share on Pinterest
I announced the Citizen M Amsterdam Airport Schiphol, a new pod hotel concept in September last year. With a bunch of journalists and fellow bloggers, I was invited to their launch party on Tuesday June 24. About 200 of us slept there after the party that started with uncorking about 500 small bottles of champagne with a red (the company red) ticker tape explosion. It is walking distance from Schiphol terminal 3, just opposite the short parking areas.

Its 2 m long and 2 m wide Bed under the window with, on the west side of the hotel, nice views on one of the landing strips of Schiphol Airport:

Under the bed, like in yachts, there is a huge trunk size drawer where you can stash your luggage away. Next to the entrance there are 5 coat and dress hangers over a small locker that can hold a small laptop without loading facility for its batteries.

How do they manage to care for those beds? Very simple: They developed a system whereby the whole mattress can be pulled up to the front of the bed vertically. The used sheets fall off and the clean sheets can be hung up on the two upper corners instead of crawling around the bed (which would be impossible.) They applied for a patent for the system.

The shower and the Throne have each their own cylindric glass separation. The throne's glass is etched. Between the shower and the bed there is a room wide curtain to separate the bath"room" part from the sleeping area of the room. In the Throne's cylinder an extra air suction facility prevents bad odors.

In the photo taken taken from the bed, you can see the mood lighting and, on the left, the separation curtain (they took care of the Yotel guest reviews that were complaining about the visibility of the Yotel Throne) and the rain shower. There are two tables in front of the bed and there is one chair available: The Vitra re issued C1 chair designed by Verner Panton.

Between the sink and the throne there is a turnable frame with, on the one side, a man high mirror and on the other side, some small shelves to store stuff and a shaving mirror and some international shaving wall sockets.

There are two types of shampoo and a water bottle, which is the only drink available in the room. Other drinks you have to fetch in the lobby or Canteen M.

Michael Eman, the F and B manager who developed the F and B concept from the beginning adds, "We have two very important moments here: The coffee moment and the cocktail moment: All our ambassadors are first class baristas and cocktail makers."

Room rates vary according to demand and start with Euro 69 per night up to Euro 139 per night.

All in all I am really impressed by the care for detail in this concept. Especially the lack of outside noise is amazing with all the planes flying around at Schiphol Airport.

Good value for money if you are looking for a bed to crash in.
4.3
Score
Popularity
Activity
Freshness
Attend Future Festival