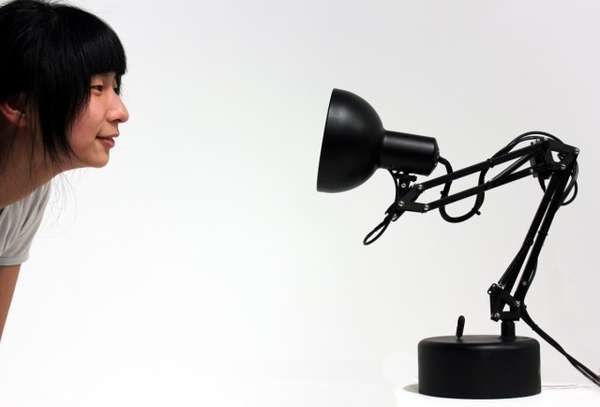 The Pinokio Lamp is Inspired by the Animated Pixar Luxo Lamp

Meghan Young — November 30, 2012 — Art & Design
References: creativeapplications.net & theverge
Share on Facebook Share on Twitter Share on LinkedIn Share on Pinterest
It wouldn't be surprising if everyone who has ever watched a Pixar film wished of having their own animated Luxo lamp; well, one group of talented individuals decided to make their wishes come true by creating the Pinokio Lamp. An animatronic desk light, the Pinokio Lamp responds to its surrounding in as adorable a manner as the Pixar animation.

Created by Shanshan Zhou, Adam Ben-Dror and Joss Doggett, the Pinokio Lamp has been outfitted with a webcam, mic, mechanical iris, servos and a halogen globe in order to achieve its life-like existence. The crucial ingredients, however, are Arduino, OpenCV and plenty of code to imbue it with impressive head-tracking and motion capabilities. It also recognizes sounds and more to display a broad range of behaviours.
6.2
Score
Popularity
Activity
Freshness
View Innovation Webinars