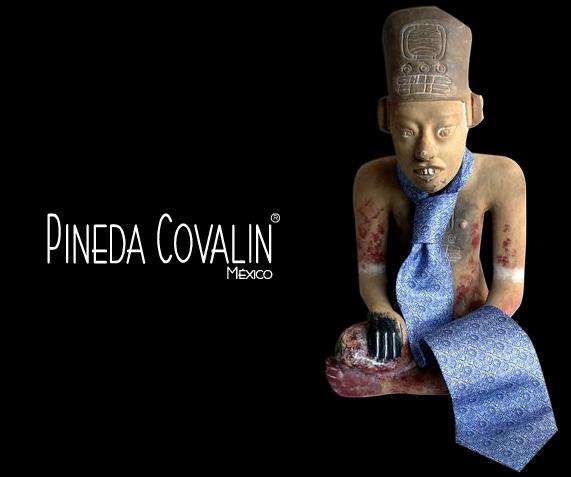 Juan Carlos Bonilla — February 23, 2007 — Fashion
References: pinedacovalin
Share on Facebook Share on Twitter Share on LinkedIn Share on Pinterest
Pineda CovalÃ­n is a Mexican fashion house that utilizes museums as one their main channels of distribution for their ties, scarves, shawls, shoes and jewelry. The reason? The business seeks to revive the Mexican culture, the the association of Mexican Fashion with Mexican Art.

The creators of the concept, Cristina Pineda and Ricardo CovalÃ­n, launched the business in 1996 in association with the National Institute of Anthropology and History (INAH). Ricardo, industrial designer, and Cristina, textile designer, negotiated acceptance of their products to market them in museums. The success of the company also helps to promote Mexican cultural, especially to tourists from abroad.The company promotes Mexican traditions, history and design. In particular, they feature the works of Mexican artistst like Frida Kahlo, Diego Rivera, JosÃ© Luis Caves, Rafael Cauduro, David Strap and Heriberto JuÃ¡rez.

In the beginning, the products began to sell in the Mexican Museum of Anthropology and History. Then in the Museum of Modern Art in Mexico City. Next, the pieces opened new channels such as the Four Seasons, Marriot, Nikko, Sheraton hotels and in the main tourist centers throughout Mexico. Now, they have reached a global audience with distribution in the United States, Canada and Europe. The places where can be found they are Phoenix Art Museum, Fine Arts Museum of San Francisco, Mexico Tourism Board, Latin American Art Museum, Reyna SofÃ­a Museum, Smithsonian Museum Stores, Guggenheim Bilbao Museum, Museum of Art of Puerto Rico, Montreal Museum of Fine Art and Textile Museum of Canada.

Overall, the association with art is a pretty interesting way of launching a fashion brand. Perhaps the success of Pineda Covalin will inspire others to follow.
4
Score
Popularity
Activity
Freshness
Get the 2021 Trend Report FREE