Fashion Show in the Desert 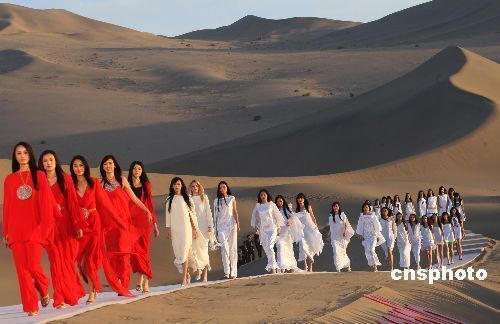 Juan Carlos Bonilla — October 25, 2007 — Fashion
References: english.cri.cn
Share on Facebook Share on Twitter Share on LinkedIn Share on Pinterest
The Catwalks are always a great show, and it seems each season, they become more spectacular than the last. Earlier this week we featured Fendi's show on the Great Wall of China, and now we're seeing Pierre Cardin's luxuriously exotic show in the Dunhuang Desert. The dramatic landscape serves as the ideal backdrop for his Spring/Summer 2008 collection.

Take a look at these exceptional photos, and be sure to check out Fendi's show in China:

1,500 Mile Runway - Great Wall Of China Fendi Show (Update) (VIDEO) Yesterday we were thrilled to feature Karl Lagerfeld's elaborate fashion show for Fendi which took place on the Great Wall of China. Our anticipation was already up, as Trend Hunter had been following the event since we first reported its announcement in June. Today we have even more photos as wel: [More]