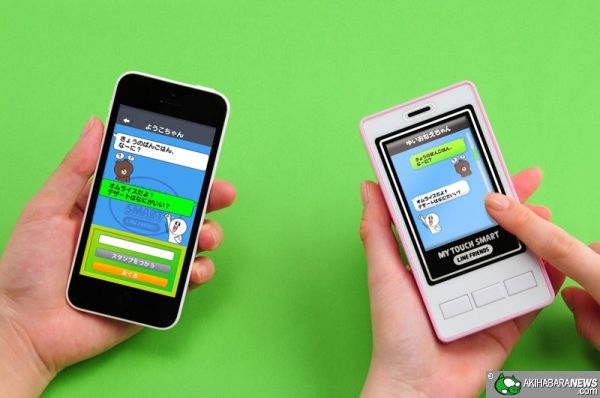 Laura McQuarrie — June 11, 2014 — Life-Stages
References: takaratomy.co.jp & akihabaranews
Share on Facebook Share on Twitter Share on LinkedIn Share on Pinterest
In partnership with LINE, toymaker Takara Tomy recently announced a new phone for kids called My Touch Smart Line Friends. With these mock smartphones, kids will be able to send and receive messages and stamp icons through the LINE communication application.

Like a real smartphone, the toy phones are equipped with a colored LED display, a camera and 30 playable apps. If a parent installs an app and connects the phone to their child's, they'll be able to chat for distances up to 10 meters. If there's one thing that's missing, it's Internet access, since many parents fear giving their children a smartphone because of this feature.

The phone is targeted towards kids age six and up and the playful, safe My Touch Smart Line Friends phones for kids are set for an August 7th release.
4.5
Score
Popularity
Activity
Freshness
View Innovation Webinars