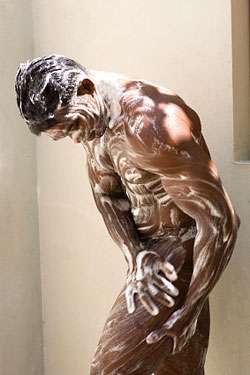 This “pheromone-infused” wash purportedly boosts sex appeal and confidence through traces of synthesized pheromones, which are supposed to help men attract women (not the other way around, as of yet).

While the jury’s currently out on whether people actually do respond more favorably to pheromones when they smell them, that didn’t stop Dial from conducting an experiment to gauge the effectiveness of the Magnetic Attraction Enhancing Body Wash. Nine blind-folded women were asked to choose between the scent strips of nine men, some of whom had showered with the attraction-enhancing soap, some with pheromone-free wash, and the rest sans shower (au natural).

One woman chose a man who had used Dial’s pheromone soap, subsequently insisting that in terms of personality and appearance, he would not be someone she would typically go out with. But did the pheromones change her decision? Probably not.

So, all things equal, you probably can’t step up your game using pheromone-laden soap--that is, if the woman you are pursuing can actually see you.

According to Dial’s brand manager, Ryan Gaspar, "We don’t claim using our product you’re going to hit a home run. We say, ‘We’ll get you to first base.’"
6
Score
Popularity
Activity
Freshness
Get Trend Hunter Dashboard