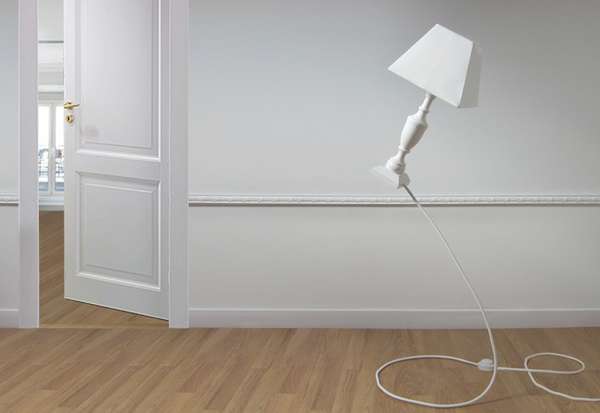 The Phantomenal III Lamp Looks to Float in Midair

Meghan Young — April 11, 2012 — Art & Design
References: guesner & trendsnow.net
Share on Facebook Share on Twitter Share on LinkedIn Share on Pinterest
At first glance, the Phantomenal III Lamp looks like a trick of the eye, as though some Photoshop magician had gotten to the image first. Defying the laws of physics, it appears to be floating in midair. Nevertheless, the light fixture is real even if the ghostly suspension isn't.

Created by French design studio Guesner, the Phantomenal III Lamp has been carefully and cleverly crafted to give the illusion that it is being held by some eerie spirit. In reality, the light fixture boasts a metal stand that has been designed to look like a common cord. Aside from this quirky aspect, the lamp has a very classic aesthetic.

According to the designers, "Phantomenal is a contraction of English phenomenal phantom and expressing faith in the spectral character of light and its uniqueness."
6.3
Score
Popularity
Activity
Freshness
Get Trend Hunter Dashboard