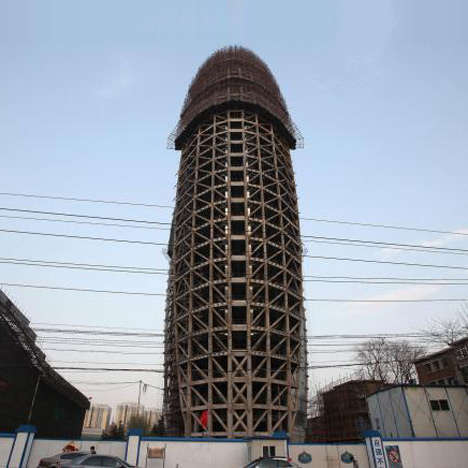 The Headquarters for People's Daily Newspaper is Sexually Suggestive

Brandon Bastaldo — May 14, 2013 — Naughty
References: dezeen
Share on Facebook Share on Twitter Share on LinkedIn Share on Pinterest
It's well known that most skyscrapers are meant to look like monumental structures, but the giant, phallic-shaped tower under construction in Beijing is being likened to something humorous. After a number of pictures began circulating on the Internet likening structures to undesirable objects, this construction photo for China's People's Daily newspaper is only the latest picture to make Internet users chuckle.

Although still under construction, the People's Daily building definitely resembles male genitalia and causes one to wonder what the final and finished product of this huge building will look like. The Chinese Government has even allegedly tried to block Internet users inside of China from being able to search for this gigantic, joke-like building.

Standing at 150 meters high, one of the most undeniable things about this phallic-shaped structure is that you certainly won't be able to miss it.
3.5
Score
Popularity
Activity
Freshness
View Innovation Webinars