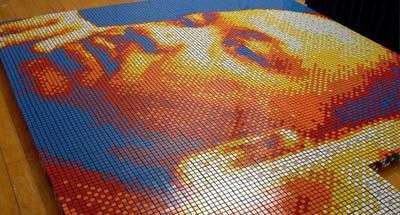 Souzan Michael — October 11, 2011 — Life-Stages
References: reddit & randommization
Share on Facebook Share on Twitter Share on LinkedIn Share on Pinterest
First of all, I’d like to preface this by saying I have never completed a Rubik’s Cube in my entire life (I’ve never even come close, and I usually need a stiff drink after even attempting to do so), so when I learned that Peter Fecteau created an amazingly realistic and detailed portrait of Martin Luther King using only Rubik’s Cubes, I was floored.

After my fuming jealously passed, I took a closer look at the work that Peter Fecteau had done—it truly is mind blowing. The project cost Fecteau about $8000, much of that money coming from donations.

Fecteau explains, “It took 40 hours to build, by myself. MLK and the work he did was simple (like the 5 colors used in the mosaic, I didn’t use green) yet complicated and difficult (like the rubik’s cube itself.)”
0.9
Score
Popularity
Activity
Freshness
Access Advisory Services