Sending Your Hair to Celebrities 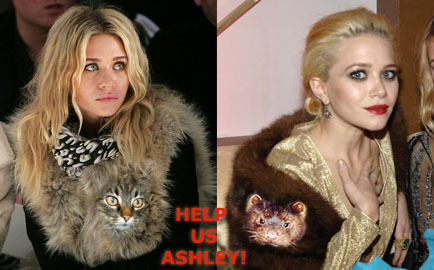 PETA is asking everybody to clip off some of their hair and mail it to Mary-Kate and Ashley Olsen for their 22nd birthdays this Friday, along with a message asking them to spare the animals skins.

"The Trollsen Twins are almost 22 - old enough to know better than to wear the skins of animals, right? Apparently not. The twins are still sporting as much fur as ever. Since they seem to be in such dire need of extra hair on their bodies, let's give them some of ours - and send a strong message while we're at it.

"Save that hair in a bag and mail it to the twins with a note that says, "Please, use my hair instead of the animals. Happy Birthday."

Check out some more on the "Trollsen Twins":