Billboards Made of Money 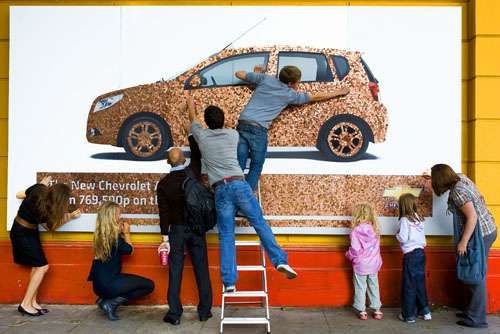 Cowbag — July 9, 2008 — Autos
References: zercustoms
Share on Facebook Share on Twitter Share on LinkedIn Share on Pinterest
Credit-crunched Londoners grabbed pocketfuls of pennies today at the launch of a 20-foot billboard advert made entirely from one-pence coins. The unique installation â€“ made using over 20,000 pennies â€“ only lasted 30 minutes as hundreds of opportunistic passers-by seized their moment to pick up a penny or two.

The penny billboard was unveiled in London's New Oxford Street to advertise the 769,500-pence starting price of the new Chevrolet Aveo.

"There has been some great car adverts before, but none that have stopped traffic and actually put money back into the motorist's pocket so this is certainly a first," said Les Turton of Chevrolet. "We're glad we've topped up lots of people's wallets, purses and, in some cases, rucksacks, but it would have been nice for the billboard to last a little longer than 30 minutes."

30 Creative Cashovations
Art Made of Money