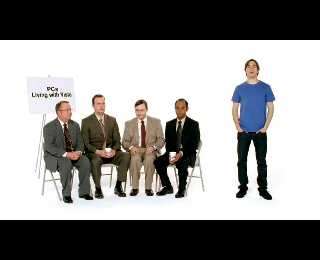 Ayman — May 17, 2008 — Marketing
References: arabaquarius.blogspot
Share on Facebook Share on Twitter Share on LinkedIn Share on Pinterest
"Hi, I'm a PC and I am living with Vista!" That is the latest twist and (below the belt) hit Apple takes at Microsoft's expense in their well-known "Hello, I'm a Mac. Hello, I'm a PC" series. The spot likens using the wildly ill-received and underwhelming Vista operating system to living with a disease or bad habit that you need to get over.

The video ad is set up as one of those anonymous group therapy meetings for people living with alcoholism, drug addiction, or some sort of negative lifestyle. The spot is full of digs and jabs at Vista masked as being supportive of PC in his time of need such as, "I'm so proud of you for doing this pal.", one PC encourages him with "You've taken the biggest step. And that is accepting that our Operating System is not working as it should.", while another quibs, "I wish i could tell you it's gonna be easier."

The ad was directed by Phil Morrison for TBWA\Media Arts Lab, Los Angeles.