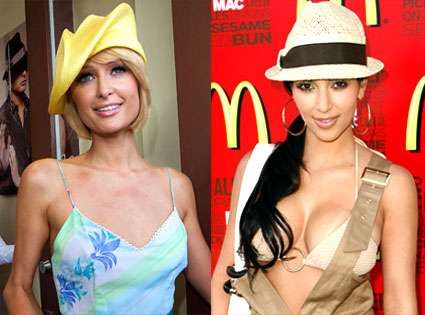 Bianca — May 2, 2009 — Fashion
References: courier-journal & ca.eonline
Share on Facebook Share on Twitter Share on LinkedIn Share on Pinterest
2009 Kentucky Derby parties are most certainly one of the highlights of the annual event; it's not just the outfits at the horse races that matter (although we do love any excuse to wear big brimmed hats), it's the Kentucky Derby eve gala fashion that we're really curious about. After all, these are star-studded affairs and the biggest excuse of the season to go over the top with your garb.

Some of the most anticipated celebrity fashion at the 2009 Kentucky Derby, which take places today in Louisville, will undoubtedly be the Derby hats and gowns worn by socialites like Paris Hilton and Kim Kardashian. But since the former best friends will be hosting rivaling 2009 Kentucky Derby parties, it's sure to be a battle of the costumes.

Whereas Kim Kardashian's fete costs $125, Paris Hilton isn't letting anyone get to tickets to her swank shindig for under $950!

Check out the gallery for some of the most interesting celebrity fashion at the Barnstable Brown Gala last night. Check back for more pictures of 2009 Kentucky Derby parties soon.
5.6
Score
Popularity
Activity
Freshness
View Innovation Webinars