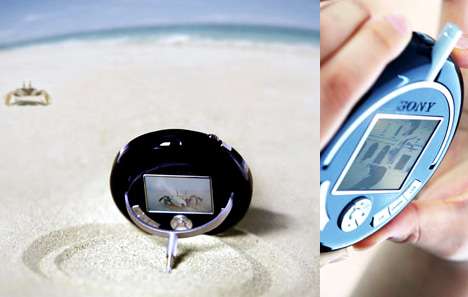 Bianca — August 12, 2007 — Unique
References: yankodesign
This Sony camera swivels on its axis to get a full 360 degree snap shot of your surroundings.

Have you ever been on a beautiful exotic island wanted to capture the entire scene? This will let you do it! "Just make sure it's sitting on a level surface, angle it, push a button and watch it spin to take the perfect 360º view of your surroundings. Everything saves to a memory card and yes it'll do video too."

Now, if you wanted to be super-tacky, you could capture an image with this beauty of a camera and have it converted to wallpapering that you would plaster your entire office with... it would be like an exotic getaway every time you go to work.

Unfortunatley it's still only in its design phase (thanks to Hye-Jeong Yang), but the Sony-branded concept could become reality!

Earthy Tonal Sandals
Suicoke and A.P.C. Work on the Depa-V2 for SS20 Walk on Free Series