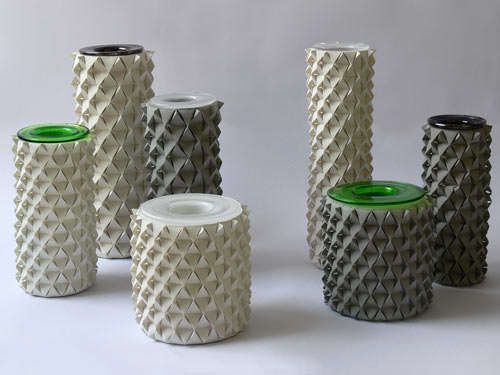 Meghan Young — October 4, 2012 — Art & Design
References: ofirz & design-milk
Share on Facebook Share on Twitter Share on LinkedIn Share on Pinterest
The Palms Origami Cement Vase may be modeled after the texture of a palm tree, but it happens to look more like a pineapple than anything else. It helps that the design boasts an overall short and squat shape, quite like that of a pineapple. Of course, there are also long and slim versions of the flower holder.

Created by Israeli designer Ofir Zucker and origami artist Ilan Garibi, the Palms Origami Cement Vase may look like they were crafted out of paper, but as the name gives away, they were fashioned out of concrete. Each vase was cast inside of a hand-folded origami mold, which could only be used once, hence making each one one-of-a-kind.
3.5
Score
Popularity
Activity
Freshness
Access Advisory Services