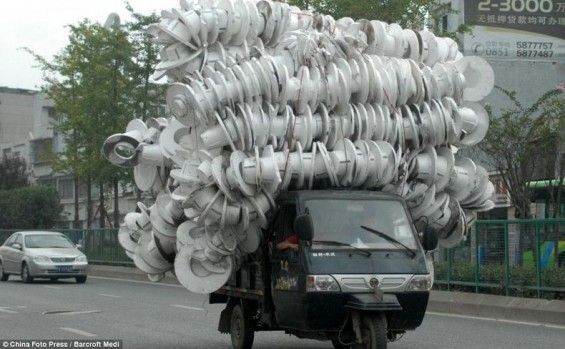 The Overload Around China Series is Amusingly Mind-Boggling

Meghan Young — February 11, 2014 — Fashion
References: en.cfp.cn & beautifuldecay
Share on Facebook Share on Twitter Share on LinkedIn Share on Pinterest
The Overload Around China photo series is comprised of images that depict a unique aspect about the Chinese culture. Due to unaffordable highway and bridge tolls in China, companies have been taking extreme measures to bypass them, even if that means facing fines as well as life-threatening situations. As ridiculous as the captures in the Overload Around China photo series are, they are revolve around very dangerous scenarios.

Compiled by China Foto Press, the Overload Around China photo series deals with a series problem. Cui Zhongfu, secretary-general of the China Federation of Logistics and Purchasing, states, "Many companies carry too much freight to try to make trips more profitable and compete with rivals." According to Beautiful Decay, "rivalry over transportation companies has cost China about a dozen collapsed bridges each year."
6.3
Score
Popularity
Activity
Freshness
Access Advisory Services