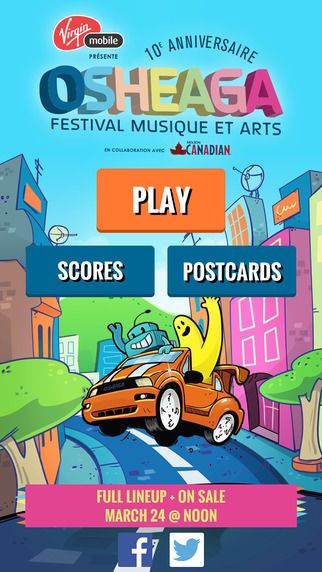 The Osheaga Festival Teases Its Lineup in a Mobile Game

Meghan Young — March 21, 2015 — Marketing
References: itunes.apple & prnewswire
Share on Facebook Share on Twitter Share on LinkedIn Share on Pinterest
Those who want to know what to expect this year at the Osheaga Festival, which is presented by Virgin Mobile in Montreal, Canada, can find out the lineup by downloading a fun mobile app. The Osheaga Festival is teasing the lineup in its 'Road to Osheaga' app, which is one way to build the excitement around the music and arts event even more.

A clever word-of-mouth way to promote the Osheaga Festival, the mobile game was created by Behaviour Interactive. PR Newswire writes that it "is an endless driver game in which Oshee and Aga, the Festival's mascots, drive through the city's streets behind the wheel of their convertible on their way to Osheaga 2015. By avoiding obstacles along the way, Oshee and Aga earn bonus '10th anniversary cake' points that will unlock a brief audio clip by the various groups and artists in attendance at Parc Jean-Drapeau this summer."
2.1
Score
Popularity
Activity
Freshness
Access Advisory Services