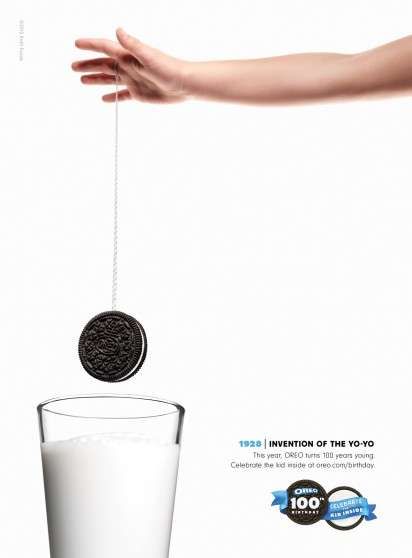 Meghan Young — March 20, 2012 — Marketing
References: draftfcb & ibelieveinadv
Share on Facebook Share on Twitter Share on LinkedIn Share on Pinterest
A particular iconic cookie company has decided to extend its milestone year by releasing more images for its Oreo 100th Birthday ad campaign. The first five were so playfully poignant, striking the hearts of millions around the world, that Oreo simply couldn’t stop there. Since it is commemorating a centurial existence, it is only fitting that people are bombarded with (close to) a hundred ads.

The Oreo 100th Birthday ad campaign was once again created by American ad agency Draftfcb. This time around, it addresses historical events such as the invention of the yo-yo, the exploration of Saturn and the birth of rock ‘n’ roll. All of these accomplishments have been cleverly depicted using Oreo cookies.