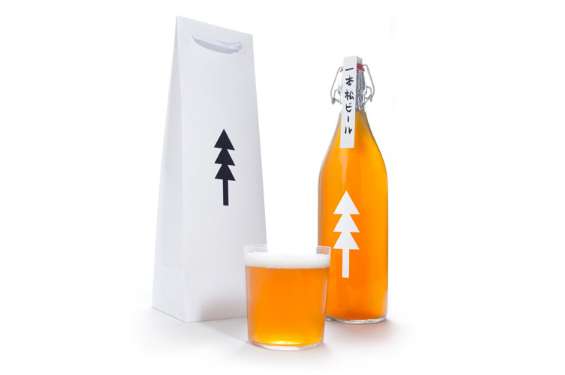 Amelia Roblin — December 11, 2012 — World
References: kotakobayashi & lovelypackage
Share on Facebook Share on Twitter Share on LinkedIn Share on Pinterest
The contemporary consumer has become increasingly attracted to minimalist labeling techniques that are quick and clear and don't clutter one's perception of the product inside. One Pine Tree Beer packaging is visibly consistent with this popular practice, displaying a single stamp on the front of its bottle and carry bag.

A silhouette of a lone and geometrically simplified conifer is the only impression left on the transparent container. Most people might not guess the heavy reference behind such an uncomplicated image, yet indeed one exists. Representing the only tree that was left in Rikuzentakata, Japan, after the 2011 tsunami, the Ippon Matsu emblem is a symbol of remembrance, hope and strength, communicated through Kota Kobayashi's One Pine Tree Beer packaging for the local beverage.
4.7
Score
Popularity
Activity
Freshness
Attend Future Festival