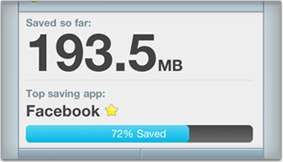 Salman Abdulaziz — May 12, 2011 — Tech
References: onavo
Share on Facebook Share on Twitter Share on LinkedIn Share on Pinterest
Are you tired of high mobile Internet bills? Well, there is a solution. Onavo, an iPhone application, can effectively double or triple your data plan by compressing data you use while surfing the Internet on your iPhone. Emails can be compressed as much as 80% to 90%, and it can squeeze web pages, app data and google maps.

Data Plans for the iPad 3G start at $15 for 250MB on AT&T, and you are charged $15 every time you exceed the limit by 250MB. Onavo can reduce data usage by routing downloads to your device through its cloud-based servers. The servers then compress the data before sending it to your device. All of your data traffic, excluding Internet phone calls pass through Onavo servers to reduce your data usage. The passage through Onavo adds a bit of extra time for your device to communicate but because files like pictures are compressed, downloads can be faster. The app also shows you how much data you use and breaks it down by app, so you know which apps are data consumers.

Privacy is not violated as Onavo does not touch data sent through https and it does not store information any longer than it needs to. Consumers have an option to let Onavo compress their emails that use HTTPS if they want. However, data sent on your phone that is not encrypted will be visible to Onavo just as it is to your to your mobile provider.

However, the drawbacks are that Onavo is not easy to install, nor does it compress any data originating from your device, or video, which is often already compressed. The app is currently free but will have a price in the future.
2.8
Score
Popularity
Activity
Freshness
Jeremy Gutsche Keynote Speaker